Our school (CAFFE) and girls in STEM 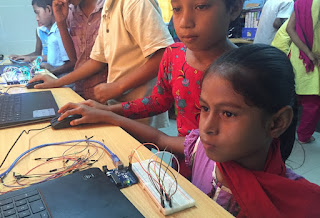 What’s the secret to encouraging more girls to study STEM subjects? I have no magic solution but I can say that at our school (CAFFE) over 60% of the students are female. We haven’t carried out any in depth, serious research into this so I can only speak from personal experience.

I grew up playing (and making) computer games, firstly with a Commodore 64 and later with an Amiga. There was very little computer education in school and when there was, it was often at a very basic level. I remember trying to write an English essay with one of these old word processor machines -it looked a bit like this:

It was so awkward that I vowed I would never use a computer to type an essay ever again! For me, computers were about games and fun, not work.

Lots of kids talked about playing computer games at my school but I don’t remember any of them being girls. It just seemed natural that boys played computer games and girls didn’t. I even remember we played a version of ‘Just a Minute’ in class where you got to pick a topic for someone else to speak about for sixty seconds. My friend and I purposefully picked computers as a subject for one of the girls (let’s call her Sarah) as we knew she wouldn’t be able to do it. I have a vivid recollection of Sarah standing up and saying, “This isn’t fair, I don’t know anything about computers, they’re for boys.”

It had just become a fact of life for me that computers were a boy thing. It wasn’t that I would have objected if a girl had liked computers, it just seemed unlikely that she would. It wasn’t only me, who held this opinion, however, Sarah also saw computers as something ‘for boys’.

Fast forward to 2011, Dhaka, Bangladesh. My friend Kobir and I were just opening up our charity computer school, CAFFE. As a way to find students, we had joined forces with another organisation that was teaching sewing skills to girls (I guess we could ask why they weren’t teaching sewing to boys but I don’t want to get side tracked!) Some of the girls also brought their brothers along to learn but as a result, our first ever intake consisted of more girls than boys. 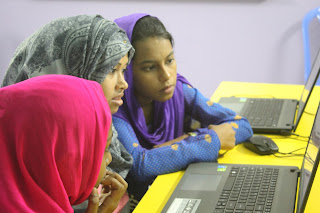 Photo Credit : Computers Are Free For Everyone

I quickly realised that due to the fact that none of our students had ever had access to computers before there was no pre-conceived idea of computers being ‘for boys’; computers were just a thing to learn how to use. In time, we grew and took on more students; naturally the girls invited other girls and over the years, we have always had a good balance of male and female students. One thing we did notice was that the drop-out rate was higher for boys than it was for girls, so in our older classes we ended up with a lot more girls than boys. Interestingly, by the time we look at the students who have been with us the longest and have shown the most interest and talent for the subjects we teach, things seem to even out again.

I guess, in conclusion, all of this points to the fact that there is no innate reason why STEM subjects should be dominated by men. Our experience in Bangladesh shows that given a clean slate, where there is no cultural baggage associated with computers there is very little difference between men and women when it comes to either enrolment in computing subjects or performance. It also helped that from day one, we had a large number of girls enrolled who acted as role-models to other girls in the community who then wanted to join our school.

The situation in Bangladesh is clearly very different to the situation in many western countries and we certainly face our own challenges. Sadly, it is still the case that many girls are either not allowed to attend our school or even if they have attended for many years may not be in a position to make the best use of the skills they have learned. One of our most upsetting cases involves a 16-year-old girl who was one of the most talented coders I have ever taught at CAFFE. We had planned to offer her a job as a part-time teacher and she herself spoke of wanting to set up her own business one day. All of these hopes were dashed, however, after she was suddenly engaged to be married and her fiancé would no longer allow her to either study at CAFFE or work. The impact this has had on her life is devastating but it will also affect the opportunities that her children will have in life too. 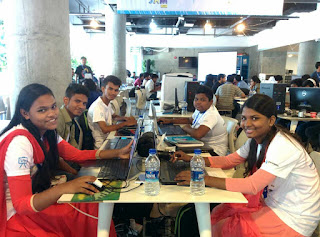 In spite of this, there is still hope and in the coming days we will be sharing an article written by one of our early students, Roxsana, who is now a teacher at the school. Her life has been transformed by the opportunities she has received. So much so that she has become the main bread winner in the family. The journey hasn’t been easy though, it’s taken hard work and dedication but as Roxsana put it:

“Nothing is impossible in life, you just need persistence.”

Popular posts from this blog

STEM education for all 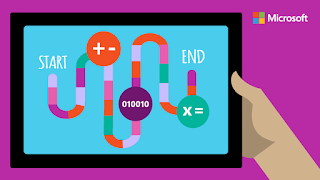 Bring STEM to your classroom (Microsoft Education) When the idea for SwopBots first came about, our mission was to reach those children who were not already passionate about coding and engineering. We made SwopBots for children who had not yet found success with other coding products. We especially wanted to appeal to girls and to children from minority backgrounds. The reason the SwopBots story is so important to us is to grab the attention of children who are more comfortable with a book than a laptop. Our goal is to capture their imaginations and let them know that computing might be worth a second look, not because we think everyone should be a developer or engineer but because everyone can benefit from the kinds of skills that come along with a little knowledge of how computers work. Logical thinking, problem solving, perseverance, trial and error, correcting mistakes and team work are not only important to engineers, they are skills that are of benefit to everyone. To
Read more 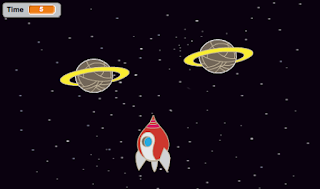 Try the game here :  https://scratch.mit.edu/projects/152611703/ Download PDF Instructions A simple spaceship game where the player needs to move left and right to avoid oncoming planets. Practices basic skills such as moving objects on the x and y axis as well as loops, collision detection and timing. Features opportunities to extend the game by making it two player or by changing the variables which control the speed of sprites.
Read more